X
This site uses cookies to provide and improve your shopping experience. If you want to benefit from this improved service, please opt-in. Cookies Page.
Accept Cookies 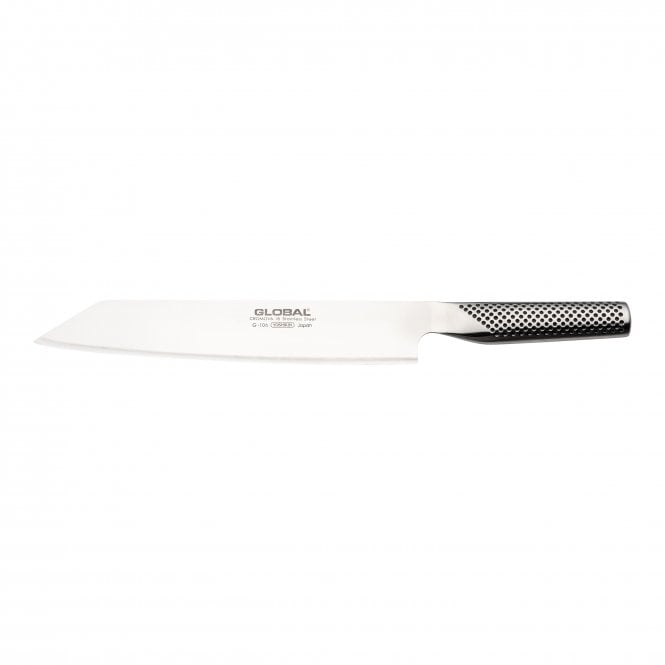 Code: G-106
Item in Stock Item out of Stock   |   Usually dispatched within 24 hours
Order within for delivery on Thursday 6th October
Loading...
Ask A Question
Email A Friend

Many Japanese knife manufacturers traditionally produced a specialist knife with one-side grinding known as “Kiritsuke”. It required considerable skill to use effectively, and in many Japanese restaurants, only the head chef was allowed to use one. The Kiritsuke Knife thus became considered to be a symbol of expertise, status and seniority.

Feeding off this tradition, Global® Knives proceeded to engineer a Double-Edged version of the Kiritsuke in their Classic series to fashion a very versatile knife. This knife can be used to perform most of the tasks normally done with a Gyuto or Chef’s Knife, but also those of the Nakiri and Sujihiki. It has less curvature than the typical Gyuto, making it less suited for “rocking action chopping” but perfect for a “push and pull” cutting action. The tip of the blade is particularly suitable for fine dicing and chopping.

Originally developed for the Roux Scholarship judges, only a further 500 of these exclusive knives have been produced so far and are available on a first come first served basis!